Imagine this: somewhere in Tasmanian waters, out of view of the keenest eye onshore, is a centre of industry. Beneath the waves, huge fans – like underwater wind turbines – rotate steadily in the blue, transforming the movement of the tides into crackling electricity. Strange devices, with their heads protruding above the surface, swallow seawater and spit it back out again. They are energy converters, harnessing the waves to produce more yet more power. Farming is happening: of fish and seaweed and mussels. A desalination plant sieves the saltwater and makes it fresh; another big factory produces hydrogen fuel; a substation keeps these enterprises ticking over. A helicopter lands on the vast platform and workers hop out, grab their bags, and stroll chatting to their living quarters. A freight ship pulls in and picks up a load of waiting hydrogen cells for export. The whole operation is self-contained: the electricity produced from the raw power of the ocean is directed to the manufacturing operations and marine agriculture. And all this industrious activity rises, incongruously, out of nowhere, from the middle of the ocean.

It sounds like science fiction. But this vision is the express aim of the Australian Maritime College and its partner, the Blue Economy Cooperative Research Centre – a $330 million institution housed partly in a handful of unassuming buildings at the University of Tasmania’s Newnham campus.

We’re inside one of these research facilities today. It’s a sort of shallow Olympic-sized indoor swimming pool in a shed, where the press of a button can generate waves. A PhD candidate is sloshing about in waders, testing a piece of ocean technology.

“Most of the technology [for renewable ocean energy] is still at the research and development level,” Dr Abdussamie said.

“Wave energy in particular still faces some issues to be fully commercialised. Tidal – there has been some good progress, and prototyping to a larger scale.”

“Tidal energy is a lot more developed,” Dr Nader added. “It has been used in Europe quite a lot already, so it’s proven to be reliable.”

RELATED: Bell Bay, Burnie to be established as hydrogen hubs in Tasmania

Dr Nader is particularly excited about the possibility of using renewable ocean energy to power offshore hydrogen manufacturing. The Tasmanian government has thrown its support behind hydrogen, which it is has tipped as the fuel of the future – a replacement for oil and gas.

Hydrogen gas is produced by running electricity through water. The electricity splits the water molecule – H20, two hydrogen atoms and one oxygen atom – into separate lots of airborne hydrogen and oxygen. It has many applications, but to take an example, one is new-model hydrogen cars. In the future, if you own a hydrogen-powered car, you will go to the service station and fill up the tank with pure hydrogen instead of oil. When you turn the car on, it allows oxygen into the hydrogen tank from the outside air. The hydrogen reacts with the oxygen and reverses the process of its creation: the two atoms fuse into water with a byproduct of electricity. The latter powers the car, and the former is released through the exhaust pipe as vapour.

“Hydrogen generation is a big one [for offshore manufacturing potential],” Dr Nader said.

“Because the water is there. You can just take the water, generate hydrogen, and then take it to the land.

“Hydrogen is a fuel. So if you have a hydrogen car, you put hydrogen in there, and it’s just like natural gas – but it just returns to water. There’s no CO2 , there’s no pollution.

“But you want to use renewable energy to make the hydrogen, so then you don’t have any emissions in the whole system.” 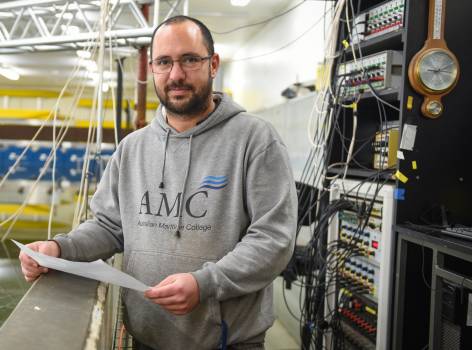 If safe, cost-effective, large-scale ocean electricity generation can be developed – a global project, of which AMC plays a major role – then the rest of the pieces will fall into place. All that needs to be done is the small matter of attaining mastery over the ocean.

All electricity comes from energy that already exists in nature: in heat, in light, in things moving. Energy can not be created, but it can change its form. Think of striking a match: turning movement into light and heat. Society today is unrecognisable to what it was before the industrial revolution, because since then we have figured out ways to capture the energy of the natural world, convert it into a form we can control, and harness it to power our lives.

In the case of the most common form of electricity generation – coal – the raw material is burned to boil water and make steam. Steam is filled with thermal energy – the term for energy that lives in heat. The world-changing innovation of the industrial revolution was figuring out how to convert the heat energy that exists naturally in steam into electricity: the energy of moving electrons. And this is done with turbines.

When the blades of a turbine spin, you have kinetic energy – the energy of movement.

Everything in the world is made up of atoms, and inside every atom are a bunch of electrons. Here’s a quirk of nature: an effect of magnets on some materials – like copper – is that if the material is in motion, the magnets cause its electrons to whiz around. Electrons moving around is what creates electrical energy: electricity. When you turn on an appliance, it works because a bunch of electrons, coaxed into movement inside a power plant somewhere, are zooming mindlessly along a copper wire trail that eventually leads inside your house and through whatever gadget you want to use. That’s why inside any generator, magnets have been strategically placed to create a magnetic field. The turbine whips the copper coil in circles inside the magnetic field which causes the electrons to start rattling around and voila – you have electricity, ready to be directed into the power grid.

In essence, what humans have figured out how to do is take powerful natural energy sources like heat, wind, and water, turn them into kinetic energy by spinning turbines, and turn that into electrical energy by spinning copper inside a magnetic field. The challenge now is to spin the turbines using the natural motions of the ocean, through wave and tidal energy generation. And the appetite is there.

“Research in renewable energy is booming,” Dr Nader said. “And Tasmania has got all the energy you want – the wind, the tides, all the resources are here. Plus, we’ve got the facilities, we can go at sea, we’ve got vessels, training and research vessels … it’s a really great place to be researching. The Bass Strait is an extreme research environment – but at least there’s no cyclones.”

Wave energy involves taking a device that has a chamber inside and partially submerging it in the ocean. Waves push water inside the chamber and then suck it back out again, and the fast-moving water compresses the air and forces it through the blades of a turbine, causing it to spin. Tidal energy, on the other hand, works like an underwater windmill: the tides rotate the blades and that’s what powers the generator.

Energy generation that comes from the ocean has an advantage in that it’s what called baseline power: you always know how much you’re going to get. Intermittent energy, like wind and solar, is dependent on what nature serves up on any given day. But there is never a day without tides or waves. The severity may vary slightly, but the sea has been predictably rolling in and out since time began. The major disadvantage is what Dr Abdussamie and Dr Nader call “survivability”. That is, the infrastructure – and the people working on it – need to be able to weather the awesome destructive power of ocean storms. It’s on this area that a large part of their research is focused.

“[Devices] need to be able to survive under extreme weather conditions,” Dr Abdussamie said. “It’s not easy to take the device offshore, and then disconnect it and take it back, if there is a hurricane or cyclone.” In focusing on wave and tidal, AMC has performed in miniature what the whole world is expected to do over the coming decades: a pivot to renewable energy. As an apolitical maritime research facility, it used to primarily work in technologies that enabled offshore oil and gas drilling. Now, the needs of the market have prodded it into using that same expertise to wean us off oil and gas, and onto renewables.

“I would say that’s the worldwide trend nowadays,” Dr Abdussamie said. “We have a lot of international collaborations, with people from Japan, from Singapore, with people all over the world – and then we share knowledge and experience. I think you would have more than 1000 ideas, just on how to extract wave energy.”

I comment that what they’ve been describing sounds more like something out of Isaac Asimov than a typical government or university-funded project. They are refining technology intended for a world that doesn’t exist yet: one where hydrogen cars are commonplace, the electricity grid is fed by a mix of renewable energy generators across the country, and where human ingenuity has been able to build infrastructure capable of surviving the wild weather of the open ocean. It must be strange: dedicating one’s time to a version of the world that is not on the radar of the average person.