‘Showrunner’ is an industry term for a writer in control of a television production. Shonda Rhimes, behind Grey’s Anatomy and Scandal; Phoebe Waller-Bridge, who ran Fleabag; and Vince Gilligan, creator of Breaking Bad, are showrunners frequently lionised as geniuses. There is a view in the collective consciousness that their hugely successful productions sprung, fully formed, from some magic brilliance in their heads.

Vicki Madden started out writing on shows like Halifax f.p., The Clinic, and Sea Patrol. She was the woman in charge for a while on a little show you may have heard of, Britain’s longest-running police drama, The Bill. Her 2016 project, The Kettering Incident, launched Tasmanian gothic onto the screens of supernatural-crime-drama lovers (and there are many of them) all over the world. This year, she helmed an $18-million Stan production that will be distributed globally by Disney, The Gloaming.

Not bad for a girl who spent parts of her childhood living out of a car.

Speaking over a coffee at a Launceston bar – she returned in 2011, after lengthy stints in mainland Australia, London and Ireland – Madden explained the nomadic upbringing provided by her immigrant, single mother.

“She came from Wales, after the war,” Madden said. “She didn’t know anybody: she came out with my dad and my dad left when I was a baby, and she had to work.”

Madden’s sister was good at school and stayed with family friends for the stability, but Vicki, the “dreamer”, had to go with her mother. The two of them travelled around Tasmania: searching for employment, forever in the car, the two of them, perennial outsiders. The first ten years of Madden’s life were spent moving from small town to small town, entering and leaving a succession of primary schools, never settling.

“Mum was quite beautiful. She was a single woman, she wasn’t from around here, she had an accent – and she had this kid towing along – it was quite hard for her,” Madden said. “Women thought she wanted to steal their husbands.”

There are obvious echoes, in Madden’s description of the nonconformist woman who raised her, in The Kettering Incident‘s Anna Macy. Played by the cold and breathtakingly beautiful Elizabeth Debicki, the character is plainly unwelcome and on edge in an unfriendly town. But she is unerringly resourceful and capable, and Madden writes her in a deeply tender light.

“I think as a writer you’re always trying to find experiences from your own life that other people can tap into,” she said.

“When you watch something and you don’t know why you like a character, it’s usually because the writer has been able to dig deep and translate something of themselves into that character.”

When Madden was about 10, her mother found a job cooking for jackaroos on Rushy Lagoon. The 22,000-hectare property in the far North-East was – and remains – Tasmania’s biggest farm. The all-female family of three moved onto a house on the cattle station, and young Vicki learned to ride horses and play guitar under the tutelage of itinerant jackaroos. She was taken to country fairs and dances, and she remembers her and her mother piling onto the tray of a ute, the men taking them bouncing over sand dunes.

When she was old enough for secondary school, she boarded at Brooks High School.

She scraped through school – saved from failing completely, she said, by a program at the time that allowed her to spend time on English and sport, rather than science and maths – and moved on to Melbourne, a journalism cadetship at Channel 10, and carving out a spot for herself in TV writing.

Decades later, she believes her mother – who died last year – was proud of her, “in her own way”.

“I don’t think she really understood what I did,” Madden said, chuckling wryly. “Because writing has a lot of downtime where you’re not really ‘working’, and she was always worried about me. But I was quite committed to the career of it – I couldn’t do anything else. She would always say, ‘well, what about real estate?’

“But she would read about [my shows] or somebody would show her a magazine or newspaper article, and she’d show all her friends. She was bemused, but I think she was proud.”

Both of Madden’s original TV shows, The Kettering Incident and The Gloaming, were ways for her to metabolise painful, complicated feelings about her own life. In the former, main character Anna is drawn back to her small-town Tasmanian home without understanding why, and is grappling with seeming totally alien to its inhabitants.

Hobart-set The Gloaming, slated for release on New Year’s Day, will be a dive into grief; it germinated while Madden’s mother’s health was fading. Through the writing, Madden said, she was mending herself.

“My mother was quite ill when I started writing, and then she died just before we started filming,” she said.

“I was really thinking about grieving and how it all works, and the gloaming itself – the word – is a space in between, a space between day and night and twilight.

“It was tough, but I think that’s the beauty of writing: you get to examine real emotions through characters, and hold them up to the light and see how people react. Thematically I was thinking about grief and how you get stuck in-between, and that’s something I wanted to explore using that as a metaphor.”

That metaphor promises to be immersive. The series will feature ghosts and witchcraft, time warps and the natural world, and two murders that provide the excuse for the rest of the plot to unfurl.

While The Kettering Incident adopted small-town claustrophobia and the dense eerie forest as characters – on equal footing with the humans – The Gloaming will wrap its narrative up in the idiosyncrasies of Hobart. kunyani/Mount Wellington will be omnipresent, Madden said, and there are even scenes shot at Mona.

“You know, it’s icy, and they’ll actually show them shovelling snow out of the driveway, they won’t just cut to them in the car. I wanted to try and capture that in Tasmania: that it’s a place with history hanging over everything, and that there is a still a place with that laid-back lifestyle.”

Tasmania, with its lineal convict brutality referred to in whispers as ‘the stain’; barely-acknowledged Aboriginal massacres; and intricate multi-generational family feuds, provides endless fodder for a writer with an interest in the macabre. Madden is perennially drawn to the supernatural and to crime as narrative trimming: perhaps an inevitability for a Tasmanian storyteller.

“People don’t talk about [the dark history], and ultimately, it’s all going to bubble up,” she said.

“There’s so much baggage that wasn’t dealt with at the time. I drive around a lot and you go to some places and you think, ‘something very bad happened here’. Even though you don’t know what it is.”

The Gloaming, one of the biggest budget Australian television shows in recent history, won’t be shown on television. It will be on online streaming service Stan, as part of the platform’s push into original productions. It’s an odd marriage: a tight and thoughtful narrative, born of quiet sadness felt on a quiet island; included in the platform’s energetic, splashy summer content campaign. But Vicki Madden, from the adult challenges of her childhood, to her choice to leave overseas success for the setting of her most complicated memories, to her stream of complex and multi-layered characters, is not one to shy away from contradictions.

All eight episodes of The Gloaming will be available on Stan from New Year’s Day 2020. 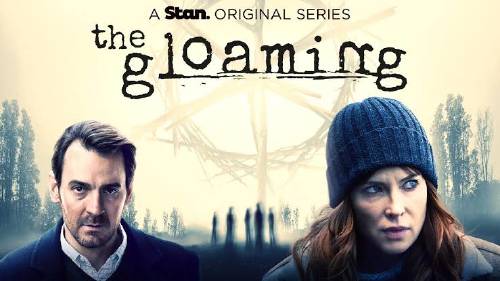 The Gloaming will be released on New Year’s Day on online streaming platform Stan. Picture: Supplied